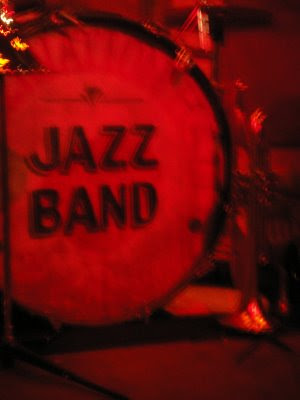 So last weekend we took a (long-overdue) vacation to New Orleans for Jazz Fest. It was awesome. It was hot, and sunny, and everywhere you looked there was music (and booze to go, of course).
We went to the actual fairgrounds on Saturday, which was a little mental — apparently it was the largest turnout they've had since the first festival after Hurricane Katrina hit. This could have something to do with Bon Jovi playing? They are a hurricane of jazz, after all. Anyway I'm not sure. We never ventured over to the main stage; the smaller ones were packed enough, and the music was incredible at each one. (We did catch some of the Kings of Leon, at the smaller main stage, and it was ridiculous how many people were smooooshed in our faces.)

And the FOOD! I'm a gumbo junkie. I ate it like twice a day and I need more, real bad, real soon. Or at least some etouffee. We also went to Acme Oyster House a couple of times to gorge ourselves on oysters. They're like a buck a pop! And that's not some happy hour special — that's all the time.
We stayed right on Bourbon Street, thanks to Expedia.com, and since we were five floors up, the raucous din of the crowd below wasn't too bad. (The smell when you left the hotel each day? Different story!) 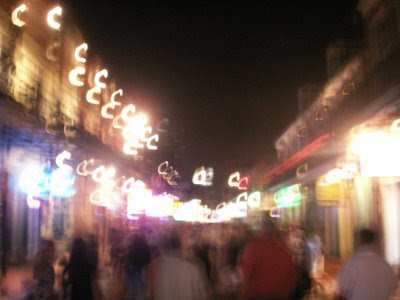 The hotel was pretty nice, considering, but the walls were thin. The first morning we woke up around 7am to a guy power-churling in the room next door. I mean, he must have swallowed a live scorpion or something. The second day, we heard the couple on the other side... y'know. And the third morning? Around 7:30am we hear a racket right outside our door. And there's a guy telling someone in a gentle voice, "You gotta get up, hon, come on, stand up... come on, now, get up and we'll take you down to breakfast..." and then out of nowhere we hear someone shriek in what sounds like a little kid's voice, "STOP HURTING MY MOMMA! DON'T HURT MY MOMMA!!" After that we looked through the peephole, and four or five cops and EMTs show up and they're trying to get this passed-out lady, who's got no ID or anything on her, onto one of those wheely stretchers. But she's really heavy and even these burly dudes can barely lift her. They finally manage, and wheel her on out. So THAT was crazy!

Of course, the best part of Jazz Fest is the vibe in the city, the music in the streets and clubs at night after the daytime festival. We were hemorrhaging money so we had to pass up some cool shows with $20-30 tickets (e.g. Ellis Marsalis, etc.) but we caught some great music in cozy spots. And Preservation Hall! Amazing. By our last night, we were saturated with jazz and decided to just spend the night on a balcony overlooking Bourbon St.
On that last day, Gina took this picture after a homeless dude (ok, well, I don't know that he's homeless, but he wanders around New Orleans with a long, unkempt beard, carrying a spear, which he uses for dancing... so, for the sake of painting a picture for you, the reader, let's just say he's homeless) knocked into another guy and his tuba. The musician went berzerk in the street, swearing at him and stomping around, chasing him around the block — and all the while he left his tuba behind, just laying in the street as it began to rain! Gina caught this awesome photo and I think it sums up a festival's end: 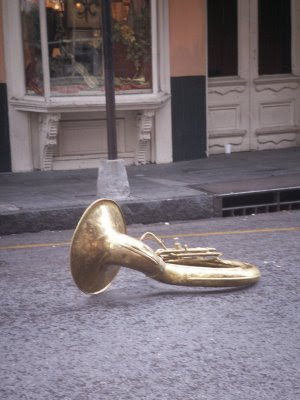