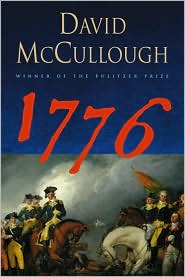 Last week I finished 1776 by David McCullough, a weighty enough volume o' nonfiction that I figured I ought to brag about it just a little.

As I've mentioned before, thanks in large part to my Dad and my second grade teacher Mrs. Walsh, I learned just about everything there is to know about the American Revolution at an early age. From Lexington and Concord to Paul Revere's house to the Old North Church to Johnny Tremain, I ate it up. Couldn't get enough. It was like Star Wars, only real, and nearby. (Not that Star Wars wasn't real; I'm not saying that. But it wasn't on my second grade tests for some reason.)

Of course, there's only so much you come away with as a kid. I'm finding now that I may have missed some of the, uh, nuances of the conflict. Such as how we were thisclose to losing the damned thing!

1776 actually begins in 1775, amidst the upbeat afterglow of the colonial army's surprisingly forceful showing at Bunker Hill. After months of stalemate, General Washington and his rag-tag army finally pull a fast one on the British — who've been occupying Boston proper — by taking and fortifying the high ground of Dorchester Heights in just one night, forcing the Brits to evacuate Boston (and thereby securing a day off for generations of future Boston employees — on St. Patrick's Day no less).

After that? Well, there's a brief burst of confidence, enough that we offically declare our independence. But beyond that? Blunders. Failures. Losing. From summer through the end of December, everything pretty much goes completely crappay for the rebels. It's shocking how close it all came to failing, how precarious the cause was.

Gratefully, the book ends on a high note — even though there's seven more years of war ahead. With most of his soldiers free to go at the end of the year, and morale at an all-time low, Washington feels compelled to do something, anything. At the same time, Thomas Paine writes his second influential and inspiring newspaper piece — with the famous lines, "These are the times that try men's souls." With a bit of luck, Washington's army begins a string of victories on Christmas night with a successful attack on Trenton. It was the turning point of the entire war — if it hadn't succeeded, that would have been that — and a great spot to end this small, early, eventful chapter of our nation's history.

Now I'm digging farther back into American and Massachusetts history with Sarah Vowell's The Wordy Patriots. I don't expect to tear up at the end, like I did with 1776, but I do expect to finish it in about 1/10th the time!
at 10:20 PM