The Yankees are in town, meaning the greatest rivalry in American sports is writing another page of another chapter in its storybook history. (Apologies to fans of UNC, Duke, Green Bay, Bears, Michigan, OSU, and others who think their rivalry is superior. They are great rivalries. They are not, however, the Red Sox-Yankees.)
Somehow the Sox have managed to win all seven of their match-ups with the Yanks so far this season (knocking on wood). The 21st century is a crazy place! We were lucky enough to go to Tuesday night's game, a blowout and a blast. And a few friends were at last night's nail-biter, including rock star Will Dailey (you should buy his new album), who said it ranked in his top five all-time games.
Wherefore came the inspiration for today's Top Five:
Top Five Sox-Yankees Games I've Attended
5. Friday, April 13, 2001
In the prime of my rip-roaring early 20s, I went to this game with my three best buddies. Of course we sat in the bleachers like any other poor, young drunkards. (This was about the time we coined the term "bases loaded," meaning ballgame-caliber drunk. Yup, those were the days!) In the bottom of the 10th inning, with 2 outs and two on, against then-superhuman closer Mariano Rivera, Manny Ramirez hit a ground ball right through Rivera's legs, up the middle to center field, winning the game then and there. We hugged, high-fived, and jumped around like madmen; mayhem ensued in the bleachers. (Looking back, this was the first crack in Mariano's previously impenetrable armor.) Later that night, we watched the ESPN highlights over and over again at Big City in Allston, cheering like lunatics at every single replay.
4. Saturday, Sept. 10, 2005 (@New York)
This game at Yankee Stadium was the cornerstone of our friend's bachelor party — we had fantastic seats thanks to his New Yorker best man, and we made him dress the part of the pretty princess with pink Sox hat, a veil, and a pink Red Sox shirt... size woman's small for a nice snug fit. On the back, below a full-color repro of his engagement photo, was the caption "Dead Man Walking." Anyway, while we felt the need to escort him anywhere outside of our section (fearing he'd receive a Bronx beatdown in the men's room), most of the Yankees fans were surprisingly respectful. He rocked that outfit all the way back into the streets of Midtown, where he suffered plenty of embarrassment — it was a gallant performance!
3. Sunday, July 27, 2003
My best friend Adam and I had second row bleacher seats behind the Yankee bullpen for this ESPN Sunday Night game. (This was when attending a game that started at 8pm on a Sunday, and getting bases loaded at said game, somehow didn't derail my entire month.) It being close to the headiest days of the rivalry, we were pretty fired up, and ruthlessly laid into the Yankees relievers warming up in the pen — in particular, old journeyman Jesse Orosco. We even got a smile out of Mariano Rivera, truth be told. (Do you remember him waving his cap to the Fenway cheers on Opening Day 2005? That guy's got an excellent sense of humor.) Anyway, after being down 3-0, Jason Varitek tied things up late in the game with a 3-run homer, and the crowd went berzerk. Then the next batter, Johnny Damon, hit the go-ahead home run. I've been to Fenway an awful lot, and I've never felt the place shake like it did that night; it's as close as I've ever felt to experiencing an earthquake.
2. 2004 ALCS Game 5
The day after Game 4 (see #1), I was back in Fenway, this time with Adam. It was a make-up game from Friday's rain-out; we had paid a ridiculous amount of money for these seats at the beginning of the series, when hopes had been high. By the time David Ortiz won this marathon with a heroic, broken-bat bloop single in the bottom of the 14th inning, my palms were literally cracked from clapping, and I had just witnessed over 9 hours — 26 innings — of Hall-of-Fame baseball history in one 24-hour span. The video below was shot from right near our seats, and honest to God, this is exactly what it was like: 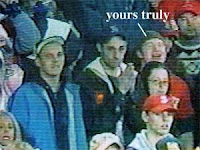 1. 2004 ALCS Game 4
What can I say? Dave Roberts's steal, Bill Mueller's single up the middle, Big Papi's walk-off home run — this was the turning point of the franchise and of my life as a fan. We were even on TV during the 9th inning. It's also just one more reason I love my wife. The Sox were down three games to none in the ALCS, it was a cold, drizzly Sunday night, and tickets were easy to come by down at the park. I happened upon an extra free ticket, from a guy at the bar who couldn't get rid of it, and I called everyone who might want to go: my dad, Adam, a few other guy friends... no takers. Gina, however — a Yankee fan — decided to come brave the elements. She was up for one more baseball game before summer's end, and figured she might get to see her team win the series.
Of course, it ended up being an epic battle, a last stand. By the end of the game, like the Russians in Rocky IV, I swear Gina was rooting for the Red Sox. It was impossible not to.
And no, maybe I didn't know it then, that it was the start — of it.
But I didn't not know it either.
at 11:33 AM