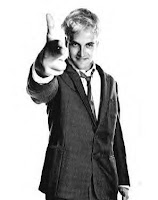 Well, I can't fight it any longer. The sick has finally got me.

Oh, don't worry, I'm not swine flu sick or anything like that poor college kid. (Can you believe that? It's wicked sad. Whole campuses are like, infirm! It's mad. The first week of college should be the best week of your life, meeting hundreds of new people on equal footing, with a chance to define yourself on a blank slate. You should be exploring and conquering your new world, roaming from new class to new party with new friends — not in the sick bay. Poor kids.)

No, this is just that run of the mill cold you get when it's warm outside and then cold inside, and then it's cold outside, and then it's warm again and your body's tired of playing games so it just gives up. Plus everyone on the T has been hacking all over me for the last two weeks; it was bound to happen. And I got like, an hour of sleep last Wednesday night so that couldn't have helped things either!

But it didn't ruin our weekend or anything. (The Yankees took care of that all by themselves.) Our friends in J.P. threw a pretty fantastic BBQ during the open studios on Saturday. And the combination of an oncoming cold and Sunday's gloomy weather was all the justification I needed to laze about all day, reading and watching football and rainy-day television by the fire. Even though it was like, hot outside. We also baked a whole chicken (never done that before — came out pretty well! Except I had it in there upside down, whatever) so between the wood stove and the oven and the muggy day, our apartment was like a sweat lodge by 6pm. I think it helped.

Speaking of being sickly: despite a drop in support this year, Massachusetts residents still favor our mandatory health care system by a 2 to 1 margin, according to a poll by the Boston Globe and Harvard School of Public Health poll. I love this place.

And speaking of Massachusetts, we watched a couple episodes of HBO's John Adams miniseries over the weekend, too. It gets me all fired up! That South Carolina delegate really got under my skin; I guess things haven't changed all that much in 200+ years!

One last political note: looks like we'll have an interim US Senator to represent us after all, should a health care bill advance to a vote before January's special election. You can see a roll call of how your rep voted thanks to Boston.com. I was pretty surprised to find that my state representative, A. Steven Tobin (D), voted nay! I even wrote to him before the vote, urging him to honor the wishes of our late Senator Kennedy, not to mention our state's democratic majority. Guess who may have lost my vote in the next election?