Guinness is good for you


Now that I've got dry socks on for the first time in days, I can finally think about something besides water and where to put it. And that brings us to tomorrow: I'll be playing a Saint Patrick's Day show from 4-8pm at the Sweetwater Cafe downtown (view map). 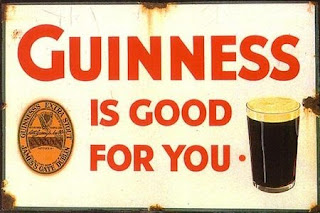 With a sunny forecast in store, what better way to welcome this annual rite of spring? Come by after work, say hello and have a pint, and just make sure to head home before the combination of Guinness and rebel songs gets you feeling too plucky.

You realize it's a Wednesday night, right? I'm not 25 anymore!
I realize that in the past I've dragged you out for 11pm sets on school nights, for which I'm sorry. This is why I requested a happy hour gig. Stop in after work, take off by 6pm, and you could still be in bed by sundown, old-timer! (Or you could stay out 'til all hours, carousing and fighting and whatnot. I'm not your babysitter.)

Wait, the Sweetwater Cafe? That's not even a real Irish pub!
Precisely! As someone who truly enjoys a good public house, and has spent many a St. Paddy's Day in Irish pubs around the city... they are much more enjoyable on March 7 than March 17. The Sweetwater has several key pub qualities — cozy feel, comfort food, a decent pour — and it'll be busy as well. But busy like a Saturday night downtown, not like New Year's Eve in Times Square. This also means that instead of hearing "The Wild Rover" six times in 3 hours you'll only hear it twice.

You're not even Irish!
Shhhh... don't blow this for me.

Is Guinness really good for you?
In as much as drinking it makes you feel good, certainly (that's where the old ad campaign derives from). But it also has fewer calories per 12 oz. than a Budweiser (125 cal. vs. 145 cal.), and has been found to contain antioxidant flavonoids that help prevent blood clots, as compared to lighter beers. This might be the right point to remind you that I'm a musician, not a doctor.

When are you playing again?
How did you pass the reading comprehension section of the SATs? Anyway, here's the recap: