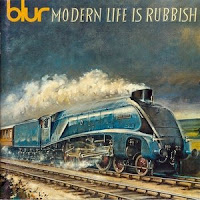 I remember reading a story about H&M when they first opened up stateside, where the CEO or spokesperson referred to it as "disposable fashion." The clothes are stylish and cheap, but poorly made. (To wit, my wedding suit was from H&M; the pants were unraveling at the seam by the end of the ceremony.)

And the whole idea is: that's ok. You buy a cheap-but-trendy sweater, wear it to your big party, maybe once more, and when it starts to pill/tear/shrink, so what -- it's out of fashion anyway, or you're sick of it, and it's time to buy a new one.

It’s similar with printers, an industry that mastered the now widespread practice of discounting its basic equipment only to rob consumers on refills. When our 5-year-old printer was acting up a few weeks ago, do you think we got it repaired? Of course not! We went out and bought a new one, for just $30 after rebate. It would have cost at least twice that to get it repaired.

I think this is part -- perhaps even the crux? -- of the problem with our modern consumer economy.

Yes, it's wasteful that we continually replenish our supply of poorly made stuff all the time, and unconscionable that our unwanted but more or less functioning printers end up in a heap in Africa, oozing toxins into some kid's drinking water.

But this behavior is also destroying pillars of American prosperity.

Back in the day, a guy owned a good suit or two, and a good hat, and a few nice shirts and a pair or two of wool pants. And he wore them all the time. He may have dressed the same each day, but at least he looked sharp.

Those clothes cost him a bunch of money -- one reason why he owned just a couple of each. But they were made in America, and made to last.

The loss of American factory jobs is well lamented. But there’s another job being lost here, too.

When, after seasons of wear, his pants began to thin, he would take them to a tailor - because they were quality possessions, worth the investment. When the soles of his leather shoes wore through, he brought them to a cobbler. When his TV went on the fritz, he called a TV repairman, because you couldn't just pick up a working television by the side of the road on trash day (mock me, but I haven't paid for a TV in like 8 years).

Today? In many cases, it is generally cheaper and easier to buy a replacement product -- a new blender, or sweater, or toaster, or microwave, or air conditioner -- than to get your old one fixed by a professional. So in addition to wiping out domestic manufacturing jobs, this trend is eating into traditional skilled professions. To quote the US Bureau of Labor Statistics:

"Employment of shoe and leather workers and repairers is expected to decline rapidly by 14 percent through 2018 … buying new shoes often is cheaper than repairing worn or damaged ones."

Thankfully, we will still ring the repairman for major investments like refrigerators, cars, houses. Not to mention our bodies – we still value them enough to go to the dentist instead of just buying fake teeth at Walgreen’s!

This phenomenon even extends to food: By cost per calorie, it's often cheaper to buy food at McDonald's than at a healthy restaurant or even the grocery store. The calories aren't as good for you, of course – but once again we are wooed by the idea of getting more crap for less money instead of investing in something of higher quality.
While we still employ well-paid industrial designers, gone are the middle-class men and women who built and repaired products meant to last a lifetime. The focus has instead shifted toward churning out a never-ending cascade of new products as cheaply as possible -- while white-collar marketers contrive new ways to sell all that garbage to the rest of us.

And we buy it.

It’s discouraging, but does this spell the end of society? No, we’ll be ok. We no longer produce a lot of real stuff, but we do produce ideas and information. And weirdly, they need repairs, too. For better or worse, you are probably more likely to call the Geek Squad to salvage your desktop than hire a carpenter to fix your desk.

Where am I going with this? I don’t really know. I am super guilty of it myself. I own very few nice things, because I lose everything -- on trips, on trains, at people’s houses. In fact I left that H&M suit jacket on Thompson Island in Boston Harbor. I've owned dozens of sunglasses, none of which cost more than $15. And I’m on my fourth bike of the last 10 years, all bought used, on the cheap, because they tend to get stolen. (Although I guess they were recycled back into use after they were stolen… which is a plus? Err… yay.)

Anyway, from now on, I am going to make an effort to buy less crap in favor of quality products that last longer. For every two H&M shirts I might have bought, I will get one L.L. Bean shirt. For every pair of Bass shoes – which are made from “leather and/or plastic” and start to squeak after 4 months – I will buy Uggs or Dr. Martens and wear them twice as long.

And I promise I'll recycle that printer.