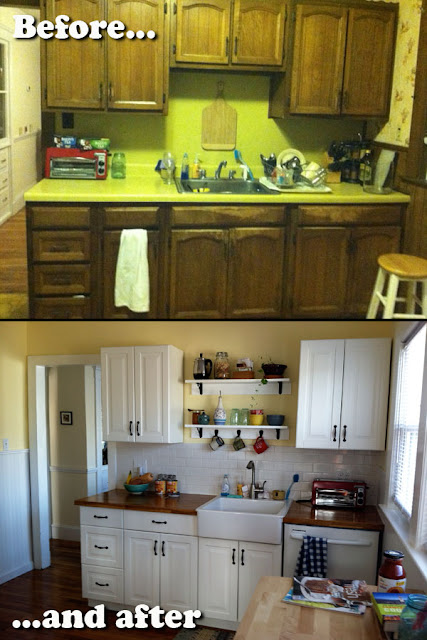 This had been on our minds for a long, long time, and we had plenty of opportunity to think about what we needed, what we wanted, and what we could live without. The number one priority? A dishwasher!

We accounted for cabinet space lost to the dishwasher, and where we'd gain it back, and once we had our layout (Ikea's 3-D kitchen planner is an awesome tool, whether or not you're using their cabinets), it was time to focus on the nitty-gritty of making it happen -- ideally within a week, so we wouldn't be without a stove and sink (eating take-out at every meal and making tea from the bathroom faucet) for any great length of time.

We had to play contractor and book a plumber and electrician to do the complicated/dicey stuff, plus a floor guy to resurrect the hardwoods (more on that in a second), but took care of everything else ourselves. Here's what the Kotter kitchen looked like -- the official 'before' shots:

We decided to buy the cabinets (white), sink (apron front), and countertops (butcher block) from Ikea. We were planning on ripping up the linoleum floor and laying down tile, but after peeking beneath the surface to see what kind of subfloor we'd be dealing with, we discovered the original hardwoods underneath everything: 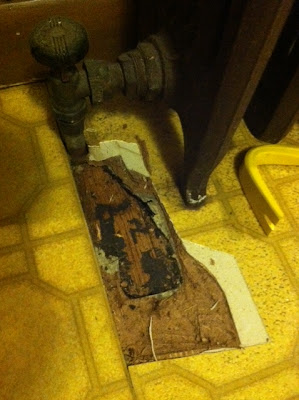 It's the first nice surprise our house has ever had for us (usually her surprises are along the lines of, "Hey, I'm flooding from a pipe in the attic that shouldn't even be there! Better make sure all that water doesn't short out my 1920s wiring! Surprise!"), so we decided to go with it. Plus, you're not supposed to tile over hardwoods -- too much give -- so we'd have had to rip them all up, lay down plywood and backer board, and then tile. Sounds like a royal pain, right?

With the help of Gina's Dad, her cousin Kyle and my own cousin Greg, we tore the place apart on a Saturday. Ripping out the cabinets and countertop went much faster than I expected -- it helped that we could just chuck everything off the deck into the backyard:


-- but ripping up the old linoleum took all afternoon. There was a layer of yellow vinyl or linoleum (they are apparently different, but I can't tell the difference), a 1/4" layer of particle board, a layer of vinyl flooring that reminded me of my middle school science lab, and some black, probably toxic tar paper under that. 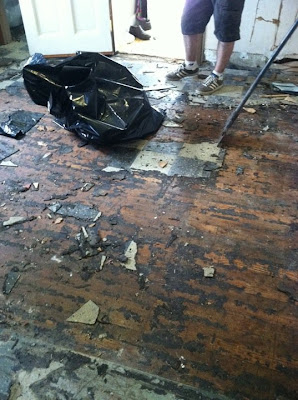 The flooring in the pantry was downright impossible to scrape up, so we ripped out the floorboards entirely and actually installed new hardwood flooring there (only took one box).

The plaster behind the fake wood paneling was gross, so we opted to simply replace it with fake white wainscoting. And the sink wall was a disaster -- beyond the two layers of ancient wallpaper -- so we ended up gutting the lower half down to studs so the plumbers could replace some of our brass (!) pipes with that newfangled 'copper' stuff. 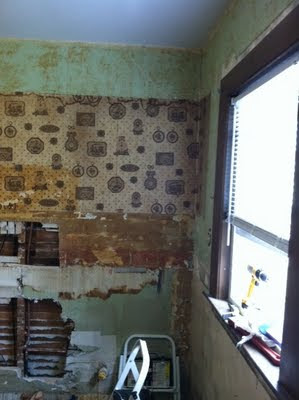 Wrecking S#!t is Easy, Now for the Hard Part


Once the plumbers were finished, we closed up the sink wall with drywall:

...and Kyle single-handedly installed all the white beadboard. We primed and painted the other walls and trim, quickly transforming what had become a pit of despair into something that at least had the potential to one day host human life again.

But the biggest, most revolutionary change took place once we had Lee's Flooring come in to refinish the hardwoods after decades of hibernation. It took them just a couple hours the first day and even less (for a second coat) the next day, but witness:

After that, we dared to dream. Was there a chance that maybe this wasn't a horrible mistake after all?

Time to Make the Cabinets

Ikea saved us a bunch of money, but also some work by delivering our half ton of cabinets and countertops for just $99, which was pretty sweet. Now it was time to put it all together.

They were actually pretty easy to assemble, once you get used to the Ikea hieroglyphics (like most of their instructions, there are no words, just universally ambiguous cartoons... I wish I were kidding). The design of the cabinet system is definitely pretty ingenious, if a little cheap feeling because of the MDF/particle board construction. But Consumer Reports gave their cabinets high marks, especially for the price, and we like the look.

And the butcher block counters were of better quality than I expected, and cost less than even the cheapest alternative (Lumber Liquidators). Note that one side -- the uglier one -- actually had 'DOWN' stamped on it, so you're limited in that sense, but whatever.

We coated the counters with Waterlox in the garage over the course of the week -- three coats on the top, two on the bottom -- and they came out looking great, and repel water as advertised. I sanded them just a touch before the final coat to smooth out some of the bubbles that had formed due to sawdust and stuff floating around in the garage. And since they're wood -- compared to say, stone -- they're pretty easy for a DIY'er to deal with. You just measure what you need and cut them to fit, set them in place, then drill pilot holes from underneath and secure them to the tops of the base cabinets.

To support the countertop over the dishwasher (the end of the run against the wall, by the window) we secured 1x4 cleats to the wall studs (side and back) and then attached sturdy steel L brackets to them, level with the top of the sink base cabinet, plus a couple of L brackets on the sink base. Then we just secured the butcher block to the brackets.

The sink just dropped in place between the two sections of butcher block (we had to notch the counters slightly at the front, with a jig saw -- this was one Ikea cartoon I could understand), and we sealed it with silicone. (We also coated the exposed edges of the wood with a layer of clear silicone before installing the sink for extra water protection, and glued a piece of aluminum foil underneath the counter to act as a vapor barrier above the dishwasher. Ikea sells a real one for like $3 but I forgot to buy it. Or maybe I did buy it. It's probably in some bag somewhere, oh well!)

After moving the fridge and stove back into place and hooking everything up, we were just about back in business. I just finished tiling the backsplash last night, which was surprisingly easy -- although you get that panicky rushed feeling as the thinset (and, on the second day, the grout) begins to dry, like when you're trying to keep risotto from burning on the stove.

Now we're now taking care of a hundred little details it feels like -- filling in nail holes in the molding, second coats of trim paint, attaching the toe kicks, waiting for the dishwasher handle to arrive -- but we're just about done. We still want to build and hang shelves between the cabinets above the sink (we've been hunting for nice wrought-iron shelf brackets but haven't found them yet). We also want to get a flip-down wall table from Ikea that we can install by the windows, for a little foldaway breakfast table.

The total cost? Well, more than we expected of course. It wouldn't be a home improvement project if you didn't go over budget! But not too bad, considering how much nicer it feels. Let's add it up:

Anyway, if you have any questions about how we did one thing or another, feel free to ask in the comments and I'll do my best to answer. For now, we're going to take a little break from home improvement for awhile!

Update: By request, here are a couple more before and after comparisons from around the room: