It's been a while since we had a good old-fashioned Top Five Day. As you may know, I work smack in the heart of downtown Boston. It's awesome. After working for years at the fringe of civilization on the outskirts of Brighton, it's been an invigorating and exciting change of scenery.

Steps from my office you'll find any meal you can imagine (and probably some that you can't, a few blocks south in Chinatown); the world is my oyster. I mean that literally: there are like four places that serve fresh oysters nearby, including $1 oysters deals at Marliave (from 4pm-6pm) and the Green Dragon (all day).

What's more, the competition keeps prices in check. There are so many competing delis and restaurants and take-out spots that no one is able to extort the legions of working stiffs looking for a good bite to eat.

Still, it's not all a foodie's dream around here; there are some real duds, too. Allow me to take you on a tour of the Top 5 Most Depressing Lunch Spots in Downtown Boston: 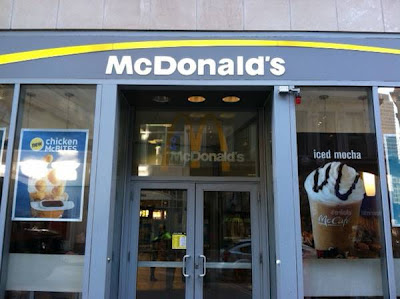 Hey, I have nothing against McDonald’s. In fact I get takeout from this one from time to time -- $4.99 for a Southwestern Salad with grilled chicken and Newman’s Own chipotle ranch dressing? Can’t beat that.

But this being McDonald’s, and this being Downtown Crossing… well, the weird-to-normal ratio in this place is off the charts. It’s a true spectacle. If you want to spend your precious lunch hour in the company of panhandlers, smart-ass teenagers, and mumbling schizophrenics – basically anyone you’d see loitering outside a 7-11 or buying a drink at the Mos Eisley Cantina – that’s your prerogative. 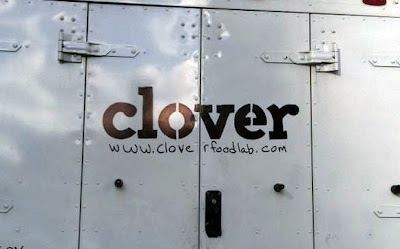 4. Clover food truck
I’m glad that food trucks have caught on and all that – Ziggy’s was a late-night savior in my Syracuse days (before he went and got busted in a crazy cocaine cartel) -- and it’s great that Clover is organic and locally sourced and vegan… but come on.

Lunch is the highlight of my workday, my only shot at transcendence in an otherwise monotonous march from 8am to 5pm. You really think I’m going to spend that sacred break in line with a bunch of hipsters so I can drop $5 on a small bowl of yogurt and fruit? That does sounds delicious – but what should I eat for lunch afterward? 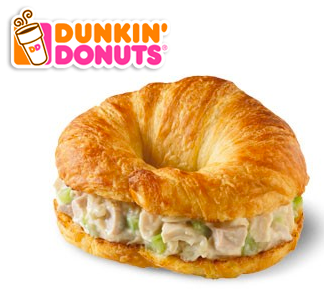 3. Dunkin Donuts
Again, don’t get me wrong: I love Dunkins… for coffee and breakfast sandwiches, that is. But to hang out and eat lunch inside? That’s depressing enough at any Dunkins, but this location faces the same problem as McDonald’s up the street. To wit: just minutes ago, while buying a cup of coffee here, I watched a guy dump a full cup of ice water right on the floor and belch loudly before hitting me up for change.

Plus, unless you’re eating breakfast for lunch (which, I’ll admit, is awesome), you’re likely choking down one of those God-awful tuna salad sandwiches or whatever new abhorrent corporate concoction they’re peddling in an effort to monetize the post-breakfast crowd. I almost didn't include that picture because it turns my stomach! 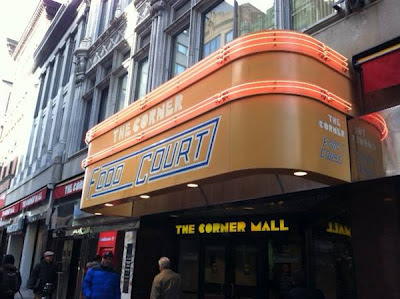 2. The Corner Mall Food Court
I used to think this place was outdated when we came into Boston for high school field trips -- and that was like 15 years ago at this point. Granted, it’s nicer inside than it appears outside (wouldn’t it have to be?), but I think some of the food on offer in here has been sitting around since the neon sign was put up in 1985.

Not only that, but think about the last time you bought mall food-court orange chicken: did you feel good about yourself afterward? No. No, you didn’t. That’s because it’s cooked in 100% pure shame oil. 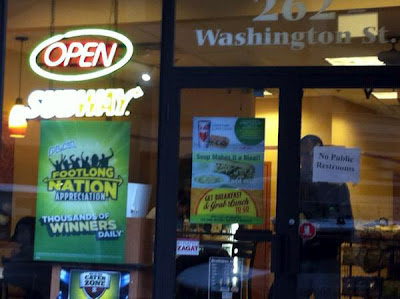 1. Subway
Our office sits four floors above a Subway (think Jared, not MBTA). You’d think that would provide ample separation, but our hallway perpetually reeks of fresh Subway “bread.” It’s not like a bakery aroma -- more like bread-scented air-freshener, rife with some fragrant chemical compound invented in a New Jersey lab. It’s truly revolting... and it’s inescapable.

Anyway, there’s always a long line at this place around lunchtime. Always. Just like there’s a line at every other freaking Subway in the city, because we as a nation have either lost hope entirely or are just a bunch of unimaginative, uninspired morons.

There are like three locally owned delis within a block of this place, where you can buy a real sub on real bread with real Boar’s Head ham! And yet, every day people jump in line for 12 inches of turkey-based salami product. It’s just maddening. I can’t even look at this place, or at the people who come out of it; seriously, I can’t look them in the eye. It's too depressing.

See also: Faneuil Hall and the Tragedy of Choice
at 2:06 PM