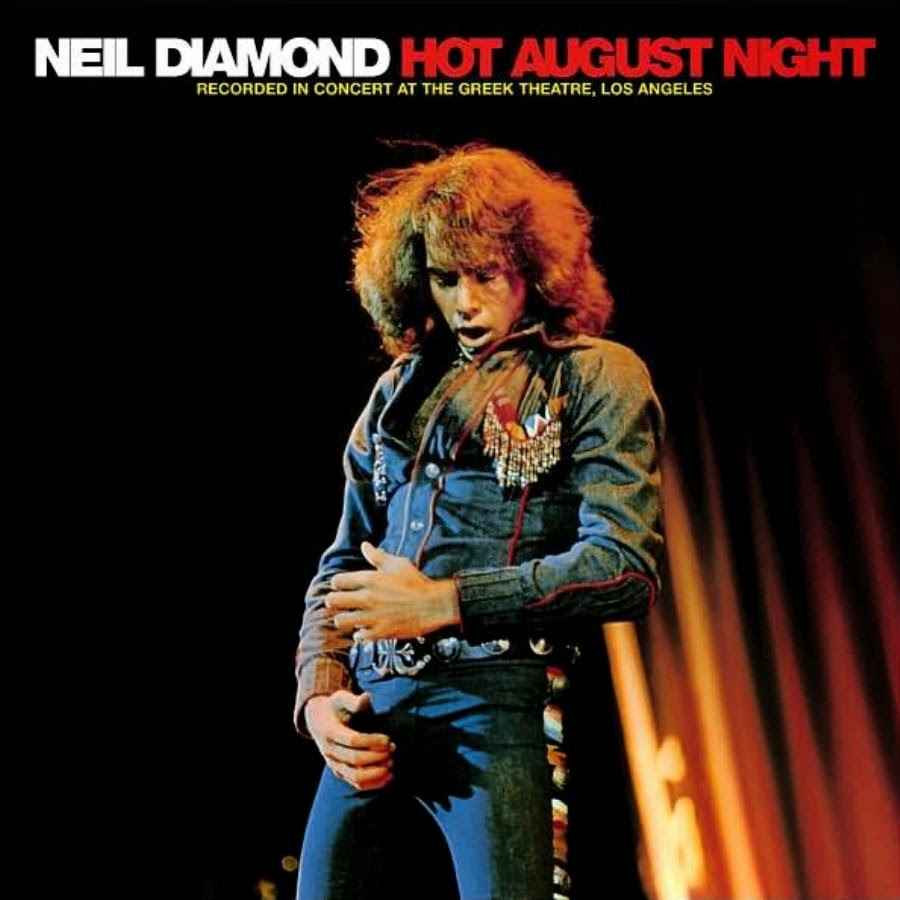 Bill Murray's character in the movie "What About Bob?" explains his divorce by saying, "There are two kinds of people in this world: Those who like Neil Diamond, and those who don't. My ex-wife loves him."

Whether it's true or not, I'd argue that if you don't like Neil Diamond, either:

a) you don't know what you're missing,

b) you didn't party much in college, or

c) his unbridled and unapologetic emotionalism makes you uncomfortable.

All of which are understandable. Just don't discredit the man's songwriting chops, because he's one of the finest of our times.

Anyway, my best friend Adam and I went to see Neil play the Boston Garden last night for an astounding 11 bucks each -- I mean, that's almost criminal -- and it was, as I kept telling the missus this morning, transcendent. Amazing.

He even played a series of songs from his 1972 "Hot August Night" live album, every fan's favorite, just as we upgraded ourselves to $150 loge seats near the stage. I had so much damn fun.

(Side note about that album: Adam and I once saw Phish play in London, at the Shepherd's Bush Empire. Midway through the show, as Trey Anastasio noodled along into the 19th minute of his 20th guitar solo, we simply got up and left the show. We went home, cracked some 500mL cans of Fosters, and listened to "Hot August Night" on the roof of our flat, and it was amazing.)

The seat upgrade, though, got me to thinking about something. There really are two types of people in this world: Early birds, and the late shift.

If you know me at all, you of course know I'm the latter. I'm late for everything. I've probably made you wait for me more than once, and I'm really sorry for that. It's horrible.

But removing the inconsiderate nature of personal tardiness from the equation, consider these two types of people at a baseball game or concert.

The early type likes to show up before the game starts, catch the end of batting practice, get settled into their seats, and see the scheduled, well-orchestrated opening ceremonies -- the first pitch, the national anthem. It's all scripted, and very comforting in that sense.

Often these are also the folks who leave in the 7th or 8th inning to "beat the traffic." Can you blame them? Post-game traffic is awful, and given the ESPNization of baseball, they've probably been at the park for like four hours already. And it's especially necessary if you've got young kids with you. Still, I was raised not to leave a game early if you can help it.

...which is why my dad and I usually stroll into a game midway through the first or second inning, and stay 'til the bitter end.

Here's why I prefer the late shift strategy. First, I don't really care that much about missing the pre-game fuss. It's nice and all, but it's just ceremony.

And sure, we sometimes miss a big first inning, and walk into a game that is already more or less decided. But that's extremely rare. Far more often, late-game or extra-inning heroics decide who wins, and in a far more dramatic and exciting fashion than even a 10-run first inning.

Case in point: Games 4 and 5 of the 2004 ALCS. Anyone who left early to beat the traffic during those historic extra-inning contests probably hates themselves just a tiny bit.

And that brings me to my final point: The people who bail out early leave empty, usually better, seats behind. Call it the pioneer spirit, but it's a rare baseball game (or concert, or any event really) when I don't end up movin' on up to better seats for the last few innings or the encore. My dad's been doing this with me since probably my first ballgame.

All because some early bird figured he'd beat the traffic. Thanks, whoever you are!

Want to beat the traffic and still catch life's memorable encores and extra-inning miracles? Arrive fashionably late, stay for the whole shebang, and just linger in the afterglow until the crowd thins out.