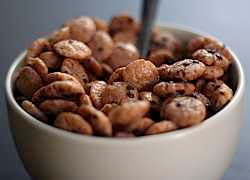 Growing up, there was nothing exciting to eat in our house. There was no microwave popcorn or string cheese. There was no soda. There were no cookies, or Pop Tarts, or ice cream sandwiches. Once in a while there were plain potato chips — or on blessed, rare occasions, Doritos — left over if my parents had thrown a party.

Friends described our refrigerator as "full of nothing." It was always jammed to (or beyond) capacity — but with broccoli, onions, condiments, raw meats, plain yogurt (ick!), wheat germ, pungent cheese, olives, butter, random leafy things... nowadays that doesn't sound SO bad, but as a kid? There's really nothing you can do with that ingredient list.

The only thing that mattered to me in that bleak, crowded fridge, was the gallon of milk. Because when we went grocery shopping, I was allowed to pick out one box of junk cereal.

I can't overstate the importance of this decision. My choice would have to serve not only as my breakfast for the foreseeable future, but as my singular sugar fix — my after-school snack, my dessert, my candy, all in one.

And so cereal was a BIG deal to me. It still is. As a kid I would have eaten it at every meal given the chance; now, sometimes I do, because I can. (Growing up isn't all bad!) My dream job? To write and design the backs of cereal boxes.

So I've given a lot of thought to cereal over the years. And after careful consideration, I offer you my Top Five Sugar Cereals* of All Time.

5. Kellogg's Corn Pops
So good, so refreshing, and unique thanks to that glazed, squishy texture — there's no other cereal like it. Incidentally, Corn Pops in the UK is much different (took me aback at first!), more like hyper-sweetened Kix, but no less tasty.

4. Cap'n Crunch's Peanut Butter Crunch
Mmm, peanut butter. Sometimes you just crave it, don't you? Mix in some Cocoa Puffs and you're really talkin'. (I realize Reese's has done this, and quite well, but it's just not the same. Plus I won $100 in a "Find the Cap'n" contest when I was like 8 years old, making me a loyal customer for life.)

3. Honeycomb
Not only did Honeycomb give us one of the Great '80s Jingles, but it tastes great and you can eat like 14 bowls of it in a row because it's only just sweet enough. Plus the giant box makes you feel like you're getting a lot of bang for your buck.

2. Golden Grahams
Talk about just sweet enough! Golden Grahams walks the fine line between sugar cereal and legitimate breakfast with aplomb. The flavor is unique, the texture is fantastic, and there's no substitute.

1. Cookie Crisp
Nothing can top Cookie Crisp. I mean c'mon, it's like a chocolate chip cookie dipped in milk... over and over and over again. Yet it's not so sweet that you burn out on it, and the cookies get deliciously spongy as they grow soggier. Goodness... I salute you, Cookie Crisp! (Weirdly, this cereal is NEVER on sale. Ever. But you can get it on the cheap at Target.)

Notable omissions:
Cinnamon Toast Crunch: I used to devour CTC, but after a bout of flu marked my breakfast "return to sender," I can't so much as think about it without feeling a little sick.

Apple Jacks/Fruit Loops: Two of my childhood standbys are just too sweet for me these days.

Booberry, Count Chocula, Lucky Charms, Alpha-Bits, etc.: The marshmallow thing never did it for me.

*For my purposes, a sugar cereal is defined as more than 1/3 sugar — so if a 29g serving has 10g of sugar, that's a sugar cereal. We'll do a top five regular cereal list too, if you promise to eat your vegetables.