I am, and always have been*, a Mac guy. This should come as no surprise — anyone who does anything remotely creative for a living typically works in a Macintosh environment. It's just the way it is. Using Adobe software on a PC is about as fun as, well, using Internet Explorer on a Mac.

Around November of 2004, I bought a few shares of Apple stock. (Literally, three or four shares. I am not a big-time investor!) I'd always loved their computers, and now it seemed other people were finally catching on — plus the iPod had taken off in a dominating way; I was even getting one for Christmas.

When I got my iPod... well, I certainly loved it. But I also thought it could have been better. Apple isn't perfect, and in my book they've often been guilty of over-simplifying things, sometimes to the user's detriment. In the case of the iPod? There was no freaking "off" button! You had to push the play button and something else simultaneously, which you wouldn't know until you read the instructions. Is it that big a deal? Hardly. But at the time I thought it was just one more example of Apple getting too cutesy in the name of minimalist design. Turning off is the second most basic function a device can perform; simplify somewhere else. 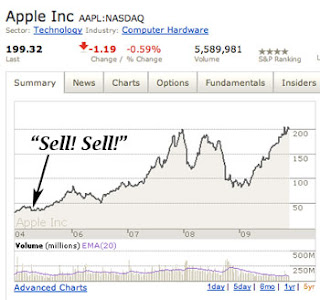 And so, in mid-January, I sold my shares in some sort of vain protest, perhaps thinking something as anti-prescient as, "This'll never catch on." I think I sold them at like $65 a share... later in the year, the stock would split; now, even after a crushing recession, AAPL is sitting around $200.

Later in 2005, that minimalist iPod and a pair of 20 euro speakers would serve as both the house stereo system and a 5-ounce, 1,000+ CD library in our Galway flat — off button or no off button!

Sorry, Apple, I blew it!

* Actually, in high school, my brother — who was the production manager for a small magazine called Antique Radio Classified — taught me to use the cutting edge desktop publishing software of the day on our circa 1990 PC. For awhile, I was a pro on like, the very first version of Aldus Pagemaker; to this day I swear the extra layout pizzaz got me better grades on term papers!

"The bouquet is reminiscent of connoisseur, with notes of hobo."

Tonight is the semi-annual "Wine Experience" at Blanchard's in Jamaica Plain (a more appropriate name would be the "Million Wine Tasting"). They have about 20 tables set up, one for each of their wine reps, and each rep has five or six wines that they distribute. You get to taste and savor them all, from smooth $8 malbecs you can take home (at a 20% discount no less) to $70 cabernets that you'll never get to taste again. You even get a booklet at the beginning that describes what you'll find at each table, with space for your own notes — which, after sampling several dozen reds, you'll need.

The funny thing is that, well... as much as it's a classy event, it's still a booze-soaked free-for-all. There are insufferable pretentious types roaming the store, casting judgment and hogging the tables, and there are wasted college kids that stagger out after hitting all 20 tables in 20 minutes. The last time we went, we tried to find a happy medium between the two, aiming to sound knowledgeable and sophisticated (not to mention sober) enough to pass for decent members of society. We pulled it off for awhile. It's fun — it's like acting! — but really, who are we kidding? I drink plenty of Trader Joe's Three Buck Chuck, and it tastes just marvelous to me. I just enjoy sampling lots of wine, and if I have to throw around some booze buzzwords to make it happen, so be it.