My #4 most successful friend — Hollywood hotshot Sarah Kucserka — recently posted a "Top 10 TV Shows of the '00s" missive on Facebook that I won't even try to compete with. Shamefully, I've probably only seen two of the shows on her list anyway. (Less shameful is that the list was littered with teen dramas, so I don't feel that bad.)

I can't compete with Sarah for many reasons, not least because I've never been a paid writer on a hit network TV show. Also bear in mind: we have basic cable; we don't have Tivo or a DVR; hell, I've never even paid for a television. Our current model — the biggest we've ever owned, at 27 decidedly non-flat, non-HD inches — is a hand-me-down from someone who moved to New York two years ago.

Still, I’ve watched the magic movie box enough in the past ten years to have formed a useless opinion on the subject, which I'm happy to share with you!

5. The O.C. - I know, I know... believe me, I know. It doesn't change the fact that we kind of loved this show and its dramatic but comically self-aware approach to a ridiculous genre. It didn't take itself too seriously (unlike, say, Dawson's Creek, One Tree Hill, etc.), and it was one of the first teen soaps to successfully focus on the adult story lines as well — which were kind of awesome. Plus, Seth Cohen.

4. The Daily Show with Jon Stewart - From thought-provoking, even confrontational conversations, to sharp, witty editorials, to joyfully silly humor, this nightly display of genius is pretty much the only reason I pay for cable. Ok, and Red Sox baseball. You can have everything else. 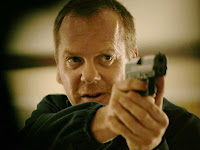 3. 24 - There was a time when Jack Bauer ruled our lives. Everything stopped for 24; it was so intense, we couldn't get through an episode without drinking a couple of glasses of wine to calm our nerves. By Season 5, though, it began to feel just a little forced; Season 6 was a total letdown. And while I never even made it through Season 7, I'd still be willing to give it another try... for Jack.

2. 30 Rock - Nothing makes me laugh like this show. Like the Simpsons at its best, the jokes are so layered, and so fast — and sometimes so outrageous — that you can't even appreciate them entirely in one sitting.

1. LOST - There isn't much I can say about this show that hasn't been said on 3,000 other sites already. If they can pull off the ending (and I love that they came right out and declared an end to the series — the X-Files would have benefited from that approach back in the day — it may go down as one of, if not the, best television series ever made.

Top Fives of the Decade: Gigs


It's extremely hard for me to fathom that the 2000's are coming to a close. I mean, I've barely accepted that the nineties are over, much less this decade. Plus, it was unquestionably one of the most action-packed ten years I'll ever experience, both universally and personally. A helluva ride! (I just wanted to use "helluva.")

I find lists and statistics to be a helpful coping mechanism in times like this. So, as the decade winds down, let's tally it up, top five style. Since I'm playing a show this Saturday (hey, you should come!) we'll begin with...

5. McGovern’s - Gorey, Co. Wexford, Ireland (7/29/05)
Playing in my namesake town in Ireland was even more of a treat than I thought it would be. The other musicians were terrific — is there anyone in Ireland who can’t sing? — and the fans who frequented the place were real music lovers.

4. Wirstrom's Pub - Stockholm, Sweden (1/3/05)
I never knew I had such a following* in Sweden until I played in the cavernous stone bowels of this very old (1500s) medieval-feeling pub. If they had paid me in grog, I wouldn’t have been that surprised.

3. The Burren - Somerville, MA (9/25/05)
This was my first show after a glorious summer in Ireland, and I’m pretty sure I was still beaming. It felt good to be home in front of a huge crowd of friends and family, and after a summer spent busking in the streets of Galway virtually every day, I don’t think I’ve ever been a more comfortable or polished performer.

2. Club Rare - New York, NY (9/17/04)
A pretty amazing night: while we made our full-band debut in New York City, the Red Sox were also in town, playing the Yankees — and foreshadowing good things to come with a stolen 9th-inning victory against Mariano Rivera. Tons of friends made the trip down with us, and watching an absolute throng of people sing along with “The Scarlet Letter” — in New York City! — was one of the highlights of my musical career.

1. Lizard Lounge (Indeed! CD Release) - Cambridge, MA (7/22/04)
My favorite gig of all time was actually at the same venue as this weekend’s show. For someone who doesn’t create much in the way of tangible objects, there’s something very cool about seeing, holding, and sharing a real CD that you made, with your name and your music on it; it’s corporeal, permanent proof of your efforts. Plus, it was packed, with all the people I care about in attendance**, and the vibe was so intimate I could hear every voice singing along (and even harmonizing) with the “Streetcorner Song.” And that’s the single most incredible thing to me about being a musician: hearing other people sing a song you wrote. It never, ever gets old, or any less special.

* Ok, it’s not really a following; in truth, I just have lots of friends who married Swedish girls.
** This is not to say that if you weren’t there, I don’t care about you. I do, really. Just not as much as if you had turned up for the show. :)  I keeed, I keeeed!


I really loved the commercials for Bing, Microsoft's newish search engine, when they came out. Except... it's hardly a "decision engine," as advertised. It's just another search engine — and not even a particularly good one, based on my limited experience with it — only with pictures.

Somewhere along the way I signed up for their travel deal alerts — actually, I think it's because they bought out Farecast.com, the site that tracked airfare prices to let you know if they were rising or falling — and now they send me Bing Travel Deals from Boston. 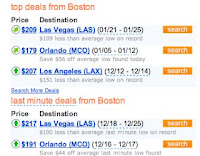 And every week, it's a different version of the same three stupid deals, to the same three stupid places: Orlando, Los Angeles, and Las Vegas. Bing: it's not a deal when these destinations are always cheap. Moreover, if I don't absolutely have to, I really don't want to go to LA, or Las Vegas, or Orlando, pretty much ever. I don't care if it's a last minute deal, or a weekend deal, or a desert doorbuster deal or what.

Bing did finally help me to make one decision though: unsubscribe!

In other news, the rumors are true: I'm coming out of retirement, although I'm pretty sure I wasn't retired, to play at the always awesome Lizard Lounge in Cambridge a week from Saturday, with the Rationales, the Future Everybody, and Scarce. I'll be playing some of the songs to your left, and debuting a brand new one to boot. Things start at 8:30pm, and tickets are 8 bucks — it'd be great to see you there!

That's (not) what I call Christmas


So we've got the ol' wintry mix heaving down upon us today. What a crock. I'll admit, I'm not ready for a full-on snowstorm, but it doesn't mean I want to be drizzled with frozen mush droppings all day. Gross!

Anyway, over the weekend we picked up our Christmas tree, decorated, bought some presents, and sat by the fire with the house all aglow... I'm officially in the spirit. I love Christmas. Honestly, I (somewhat unconsciously) sing carols all year long. Every day — even during the summer — at some point, I have a Christmas carol in my head.

But you know which decorations I'm not that into, for any holiday? Those blow-up lawn characters. I'm not some Grinch or Scrooge or cranky Republican or anything — in fact I think they're kinda fun when they're inflated — but when they're not on? Well, see below... it looks like Al Pacino just mowed down Santa and his peeps with an assault rifle, or perhaps an overworked elf went postal. A grizzly scene! 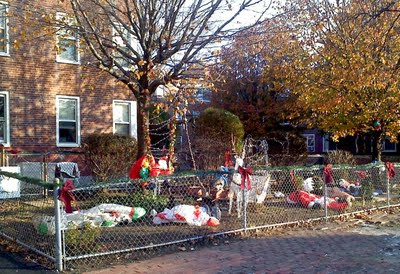 Some lights and presents around the tree are Christmas enough for me!