This Friday will be my last day at WGBH. Next week I'll be working alongside some esteemed friends at TheStreet.com — which means that I will no longer report to Big Bird (that tyrant!), but rather the madman behind "Mad Money," Jim Cramer himself. It should be quite the change of pace — wish me luck!

The night before my last day at work is exciting in its own right. My friend Edgar and I have thrown together an acoustic duo, a little rock n' roll outfit if you will. We're called the Decks. Our debut gig is this Thursday at the best little pub in the world and we'd like to see you there! Here are the details:

Honestly we're not even sure if we're getting paid for this gig, we're just doing it for the love of music and a good time. We've got a suitcase full of songs for you, and Paddy's is a little gem of a place, with a proper sound system, a welcoming warmth about it, and friendly bartenders who pour a great pint of the black stuff. (There's no kitchen, but restaurants abound in Quincy Center, and you can bring take-out into the pub with you.)

So come kick off your three-day weekend a little early with us; I promise you'll enjoy yourself. Well, unless you're an old codger who doesn't like fun, friendly people, music, or beer. In that case I don't know what to tell you. Tough luck, Menino!

Hope to see you there!

Legal notes: Big Bird is not really my boss, nor a tyrant for that matter. And while I have nothing against Mayor Menino, it's well-documented that he hates anything fun.

A weekend in Mexico 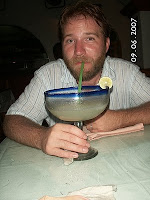 I wasn't really in Mexico for the weekend, sadly. It was just really hot, and we couldn't drink the water. And I had some chips and salsa, if that counts for anything.

People were so crazy about the water situation! (If you don't live in Boston, quick recap: a big pipe that supplies 2 million of us with drinking water burst on Saturday, and they had to start using untreated water from backup ponds and reservoirs. So we had to boil all tap water for a minute before it was safe to drink. AND make sure to let the boiled water cool down before drinking it, they had to remind the idiots among us.)

We were at a Kentucky Derby party at J.J. Foley's Fireside in JP when things went down, and while the bars and restaurants downtown responsibly stopped serving fountain soda and coffee, Foley's would have none of it — they poured me a seltzer at the end of the evening like nothing was amiss. "You'll drink pond water and you'll like it, kid!"

But they were pretty much the only ones taking it in stride. Everyone else was going bananas at the grocery store like it was the end of the world (or a 3-inch snowstorm); clerks were hauling endless pallets of water around and handing out gallon jugs like they were in the National Guard. Suddenly it was a bad idea to shower or wash your hands.

Has no one gone camping before, or swam in a pond? For the love of... it's fine! People, you can take a shower in water you would ordinarily swim in. Just don't drink it!

Anyway, thankfully that little plumbing emergency is all over now. A pretty quick fix, too!

In other news
Before we went to Mexico, I cashed in some of my Home Depot birthday bucks and built a trunk I'd been planning for some time. Check it out: 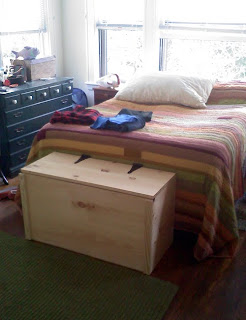 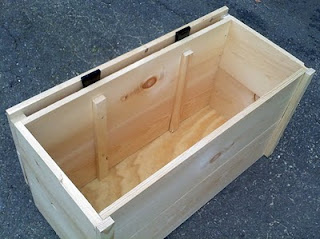 Gina thought I was building her a coffin!

Anyway I learned an important lesson: when you buy a 1x8 piece of lumber... it's not actually 1" x 8". It's like 3/4" x 7 1/4" ...ish. Same goes for a 10" board and everything else. I had meticulously (ok, hastily) drawn up plans based on totally bogus measurements! Am I the only one who never realized this?

I'll chalk it up to being 34: another year, another of the world's secrets revealed! By 35, maybe I'll understand the principles of time travel. Or how a toaster turns bread into toast.