Happy blizzard, everyone! I hope you were able to keep safe, warm, and cozy, and catch up on the books / movies / music / cooking / skiing / whatever it is you've been wanting to do more of this winter.

As for me, I was able to catch up on all that shoveling and living off the grid I'd been meaning to do. We were without power for over 24 hours, a rarity in our dense urban village. But the wood stove kept us warm, and the good folks at National Grid has up and running by late Saturday night.

Anyway, in celebration of Valentine's Day, I have a special Top 5 Day post for you: my favorite romantic songs that I've written. And as a token of my love for y'all, they are all FREE to download in the month of February.

5. Riches of the Poor | Download free
As John Lennon said, "All you need is love." It's as simple as that. I've been blessed enough to know it in many forms, and it really is all the riches one could ask for. Fun fact: The melody to the chorus was written many years ago, beside a campfire on the shores of Lake Huron, in celebration of that most marvelous foodstuff: "Peanut butter, whoa-oh-whoa-oh-oh / Peanut butter, whoa-oh-whoa..."

4. Fear of Drowning | Download free
I love the way this song came out. It covers a lot of deep territory, even though the chorus is pretty syrupy sweet; it's very much a grown-up love song. The butterflies of budding romance are great and all, but facing life's challenges with your partner is as real as love gets.

3. Going Away (Adagio) | Download free
This is a sad but ultimately redemptive song about something that happens in relationships all the time: two people who are in love start to grow apart. We all need to grow as people, and ideally you grow in step with your partner. But that's not always how it works. What can you do when your paths begin to diverge? I guess that's what's so melancholy about it.

2. J.W. | Download free
This song is just heartbreaking. Like a soggy dog mournfully howling outside his owner's door in a snowstorm. Even now, some 15 years later, it conjures up the same intense emotions within me. Is there a better vehicle for emotion than music? It's like a time machine! Fun fact: A lot of people presume J.W. to be a girl's initials, but that's not the case. (No, it's not a dude, either.)

1. On and On | Download free
I've already written a whole blog post about this one -- the song I sang to Gina on our wedding day. That's not the reason I rank it No. 1, though. It's my hope that it captures the simplicity, optimism, and sense of eternity that accompanies true love. If I had to spend the rest of my days with just four chords, well, I'd be honored to spend them with G Em Am7 and D.
at 8:54 PM 15 comments:

The NRA: Making Angels Every Day

Not just as a parent, but as a person, with a heart, this is all I have been able to think about for the past few weeks. Even amid Christmas, work, weddings, and other distractions, my heart has not been able to wrestle itself free from the weight of this tragedy -- the latest in a long, terrible saga.

So I wrote a song. And I made a video for it, with some facts about gun violence in America courtesy of Stop Handgun Violence and the Brady Campaign to Prevent Gun Violence.

1. Of course the NRA is only one part of a very big, very complex problem. We live in a violent society and we celebrate it. Video games glorify realistic warfare at the same time they desensitize us to it. Our idols and action heroes are often ruthless murderers -- even the youngest among them (think Katniss Everdeen from Hunger Games). Our intense, militaristic national sport -- this pains me to say, because I love football -- has become so violent it is causing brain damage among its players.

And then there's "The Media," which is at least partly to blame for the pervasive violence we're exposed to. But here's the thing: We control the media, on a micro and a macro level. YOU very much control the media in your home. If something is excessively violent, shut it off. You are directly in control. And WE control it as a group, because Warner Brothers isn't making action movies for the hell of it; they're making them because people pay tons of money to go watch them. Stop supporting this crap if you really want to do something. Consumer spending is one of the most powerful tools we have in our modern capitalist society.

When I studied in London, I remember being delighted that the movies broadcast on network TV largely left in the sex and nudity of R-rated films. It was the violent scenes that were edited out for general audiences. Isn't that the way it should be? Wouldn't you prefer your kid to see a pair of boobs now and then rather than someone getting shot in the face? What the hell is wrong with us? 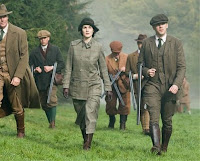 2. No one (rational) is suggesting we should take away everyone's guns. Of course you should be able to hunt. Even Lady Mary shoots for sport in Downton Abbey. And yes, you should be able to keep a loaded shotgun by the door to protect yourself if you feel it's necessary (but do note that I will not be stopping by your home anytime soon, which is probably best for both of us).

But there is absolutely no need, and no justification for, legalized semi-automatic weapons or high-capacity ammo magazines. If you need more than 10 rounds at a time to shoot a deer -- or, for that matter, an intruder -- you should pursue another hobby and probably try keeping a baseball bat by the door.

And I get that target shooting with one of these things is probably a lot of fun. That's great. Other stuff is fun, too. Lawn darts were fun in the ‘80s, but they kept killing kids, so they stopped making them. And now we somehow make do with other lawn games like horseshoes, bocce, and cornhole. Hell, drunk driving was probably a lot of fun back in the day; people did it all the time. And most of the time nobody got hurt. But not all the time. So we as a society agreed to crack down on it, and we have spared a lot of innocent lives in the process. Boohoo -- you have to take a cab or a subway home so you don't kill anyone.

Likewise, this is a tradeoff we must make as a society. If you don't think it's worth it… please think again. If you’re ready to tell parents who lost a 6-year-old child, to their face, that you don't want assault weapons banned because you have a right to shoot targets with them and it's a whole lot of fun, well... you need to reevaluate your priorities, to say the least.

And if you, like the NRA, are blindly rejecting gun control efforts and defending these instruments of destruction from being banned simply because you think it's the first step in some liberal conspiracy to take your shotgun away... I’m sorry, but you should know that I consider you an accomplice to the massacre in Newtown and to the tragedy that keeps unfolding every day in town after town after town across this country.

About 40% of American households -- over 70 million adults -- own a gun. Only about 4 million of them are NRA members. And yet the NRA continues to dictate and dominate the discussion on gun control and to hold our elected officials hostage to their demands.

I trust that many more gun owners are responsible, reasonable people who have no interest in starring in their own Rambo movie and would tolerate, if not embrace, common-sense gun law reform. If you are among them, please help us stand up to the NRA. Let our voices drown out theirs.

Here are some gun control groups worth supporting:
...and don't forget to look up your representatives in Congress and tell them you support gun law reform.

Every time a gunshot rings
An angel gets a pair of wings
The old boys of the NRA
Are making angels every day
They make angels, and it pays

How can you defend your right
To harness military might?
The blood of children on your hands
Twenty slaughtered innocents
Their blood is on your hands

So members of the NRA
Do you believe in Judgment Day?
Are you prepared to take the blame
When Jesus calls you out by name
When your soul Hell comes to claim?

Every time a gunshot rings
An angel gets a pair of wings
The old boys of the NRA
Are making angels every day
They'll make angels... until we say

"Lay down your guns
Clean up the blood they have spilled
Give up your fight
Defending our right to be shot and killed"
at 2:30 PM 10 comments: