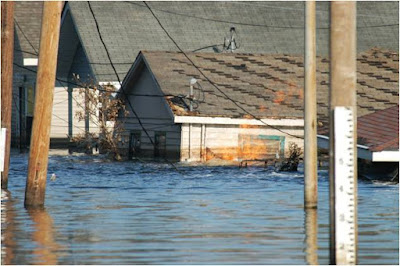 Was it really 10 years ago when the levies broke, when Hurricane Katrina flooded and drowned so much of New Orleans? I can still remember the horrifying images and footage, the desperation and suffering, and the history of injustice and unrest laid bare for all the world to see.

This song came to me almost all at once during a meeting at work, weirdly enough. (I'm terrible at paying attention to work meetings. God, they're the worst, aren't they?) I scrambled to write it all down when I got back to my computer.

Weirder still, I got an out-of-the-blue email from a friend of mine literally minutes afterward -- the only person I knew or know who actually grew up in New Orleans. She helped me finish it with some desperately needed authenticity and sensitivity.

It's an optimistic song at heart, and we've since revisited the Big Easy for an incredible time at Jazz Fest in 2009. But New Orleans is still very much in the process of an uneven redemption.

Anyway, it took me a long time to get it down on CD, and in a much different (and I hope you'll say better) form than the fast, disjointed acoustic version I played live for so many years.

On the 10th anniversary of Hurricane Katrina's horrific landfall, here's the Story of New Orleans.

Down for the festival some years ago
Woke up at 2 a.m. to go see a show
At Tipitina’s we drank on the lawn
Pulled up onstage and then kicked out at dawn
In New Orleans, New Orleans

[D] Then the music [A] stopped, the ocean [D] swelled
Our brothers, friends, and [A] children trapped in [D] hell
[Bm] And every rambling [A] heart the world [D] around
[Bm] Mourned as our [A] beloved city [D] drowned

And so my dreams were broken in two
The memory of her and the sight of you
I had to be there, I had to go
Was she gone forever? I just had to know
My New Orleans, New Orleans, oh be sure
I said a prayer for her

Walking down the streets and boulevards
Trees torn from their roots, abandoned cars
But somewhere in the air, I heard the sound
Of saxophones and trumpets underground

Looking around at all the work to be done
Enough to overcome most anyone
But the man on the stoop of his gutted out home
Humming a gospel song, was not alone 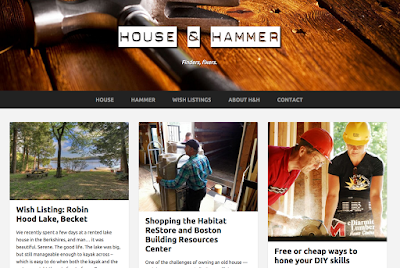 As you may know, I've dabbled in some home improvement and DIY projects over the years -- like redoing our 1970s-era kitchen before our daughter was born. I've also been writing for the Boston Globe's Sunday real estate section a bit lately. And I've always been obsessed with houses and architecture.

All this made me realize I should start a blog about that stuff -- so that's what I did! If you get a chance, check out House & Hammer, my new blog about real estate and DIY home improvement.

As the name implies, it's partly about houses -- think home ownership, home equity loans, and dream-house caliber "wish listings." And then it's also about home improvement and DIY projects, like how to build this rustic end table built from reclaimed wood: 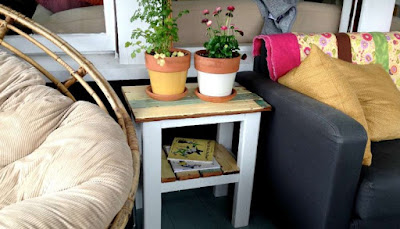 So tell your friends! Tell your neighbors! And tell me what you think!
at 4:35 PM 520 comments: